The banana cupcake bases are moist, warmly spiced with a bit of cinnamon, and perfectly sweet. Use the ripest bananas, as the riper and spottier they are, the better their flavor and easier it is to incorporate them into the batter.

Ermine frosting is an old fashioned kind of icing and is sometimes called boiled milk frosting or flour frosting. Don’t let those names put you off though. Once you’ve tried it, you’ll totally understand why it’s also sometimes called Magic Frosting! It’s easy to veganize, not nearly as sweet as traditional American buttercream, and has a texture similar to coconut whipped cream. If you’ve never tried vegan ermine frosting, you’re in for a real treat!

How to Make Vegan Banana Cupcakes with Cinnamon Ermine Frosting

Based on the interest you guys have had in my other banana treats, especially my Triple Chocolate Banana Bread , Cinnamon Swirl Banana Bread and Snickerdoodle Banana Muffins, I thought you’d also enjoy a new recipe to use up those over-ripe banana buddies on the counter. I hope you love these vegan banana cupcakes as much as we do!

If you make these Vegan Banana Cupcakes with Cinnamon Ermine Frosting please give it a rating in the recipe card or let me know in the comments! I love connecting on Instagram where you can tag me in your creations using my recipes. You can also follow me on Pinterest and Facebook. Thank you for reading along! 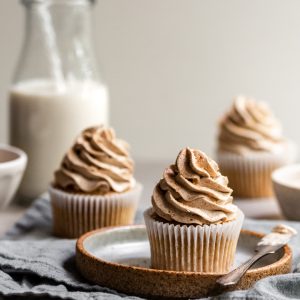 Make Ahead: The flour mixture for the frosting can be prepared ahead of time. Store in the fridge, and bring to room temperature before making the frosting. Tips for the Frosting: If curdling happens, your frosting is too cold. Place the bowl over steaming hot water until the vegan butter just starts to melt. Try whipping again. If your frosting is too soft and slouching, it is too warm either from handling or the kitchen being hot. Place the bowl in the fridge for 10-15 minutes at a time until it firms up. This frosting can be piped but will not hold up in hot temperatures as the vegan butter will melt causing the entire frosting to soften.
Did you make this recipe?Tag @crumbs.and.caramel on Instagram!

We made this last week and we’re very intrigued with the frosting recipe as we haven’t made it before, nor heard about it. It was a really nice recipe as I have always had a hard time with a vegan butter frosting - it’s too runny, doesn’t pipe well, or doesn’t taste very good and this frosting changes that! Thank you for sharing a great recipe! The cupcakes were a hit!

Hi Adelina, I'm so happy you enjoyed the cupcakes and love ermine frosting as much as I do! Thanks for taking the time to let me know! ~ Bronwyn

Great cupcakes! I baked mine for 20 minutes and they were a bit underdone and dense so I would do it longer next time! Reminded me more of banana bread than cupcakes but super yummy nonetheless. The frosting was amazing! Thanks for sharing the recipe

I'm so happy you enjoyed them! For sure, with the addition of bananas for natural flavor, they won't be as light as a plain vanilla cupcake. So glad you enjoyed the frosting, too - ermine is pretty magical! Thanks for taking the time to share your thoughts! ~Bronwyn