A tender, moist banana bread with a swirl of cinnamon brown sugar that adds a bit of fun and flavor to a crowd favorite. This vegan loaf comes together easily, and puts spotty bananas to perfect use. A smattering of cinnamon glaze is optional, but brings this treat to the next level! 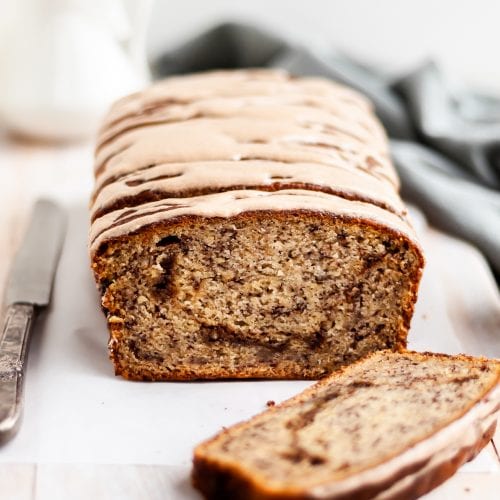 For the Cinnamon Swirl:

For the Cinnamon Glaze:

For the Cinnamon Glaze:

This looks perfect! I've just put a batch in the oven, wondering how long it stays good for after its cooked and how to store it? Thank you! Will update here about the end product! Super excited 😁

Hi Farwa! Thank for trying the recipe! This loaf is moist and should keep for a few days in an airtight container at room temperature. If it's hot or humid where you are, you may choose to keep it in the fridge so it will keep a little longer. You can also cut it in half and freeze some! It's great toasted, too :) Hope you love it! ~ Bronwyn