Moist little coconut cakes are filled with a creamy coconut custard, topped with a fluffy coconut frosting…and topped with flakes of toasted coconut. Now while that’s a lot of coconut name calling, these sweet treats are delicately flavored and totally indulgent! 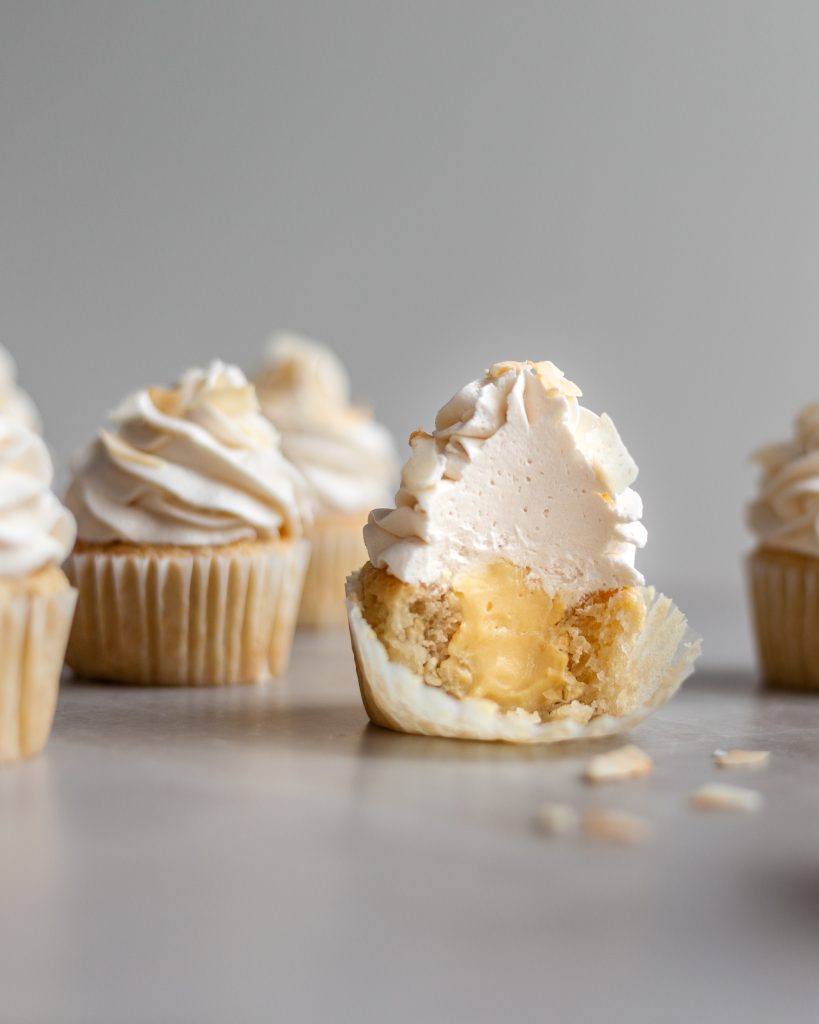 First up, start with baking the cupcakes so they can cool. Meanwhile, make the custard so it also has time to chill, and then whip up the frosting. Using the wide end of an icing tip or a small knife, remove the center of the cupcakes so we can tuck some delicious custard inside. Top with a swirl of frosting and a sprinkle of coconut, and we’re ready to indulge!  If you like a little more texture in your cupcakes, you can also add in fine coconut shreds to the batter. For this recipe, I was going for tender, pillow-like cupcakes, reserving the top for a bit more texture. 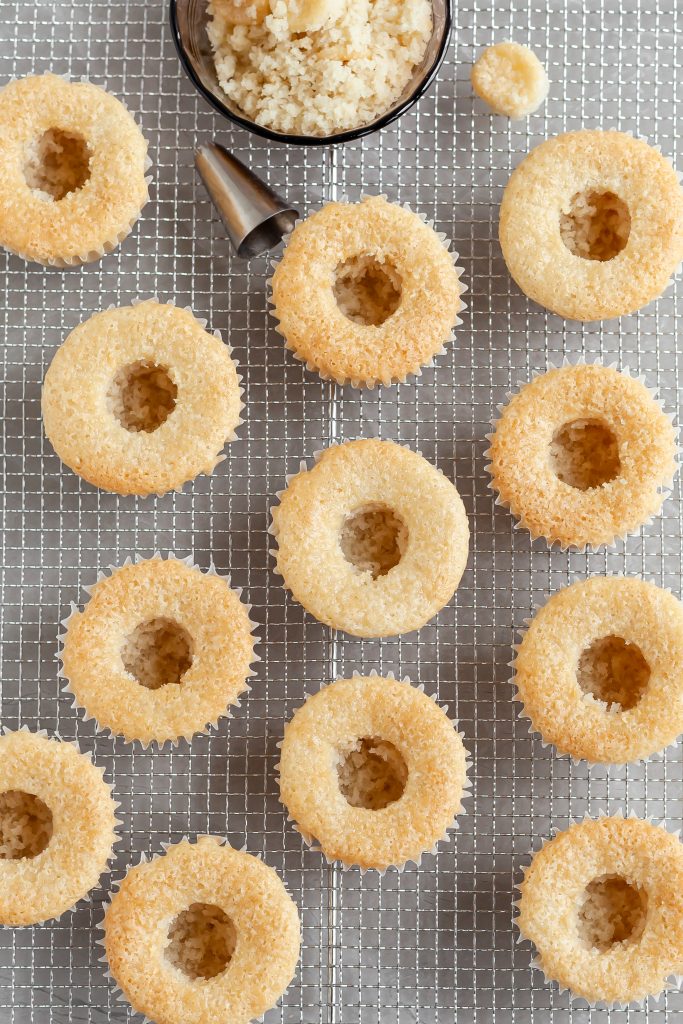 Step #1: Cut a small hole in the cupcakes with a frosting tip. 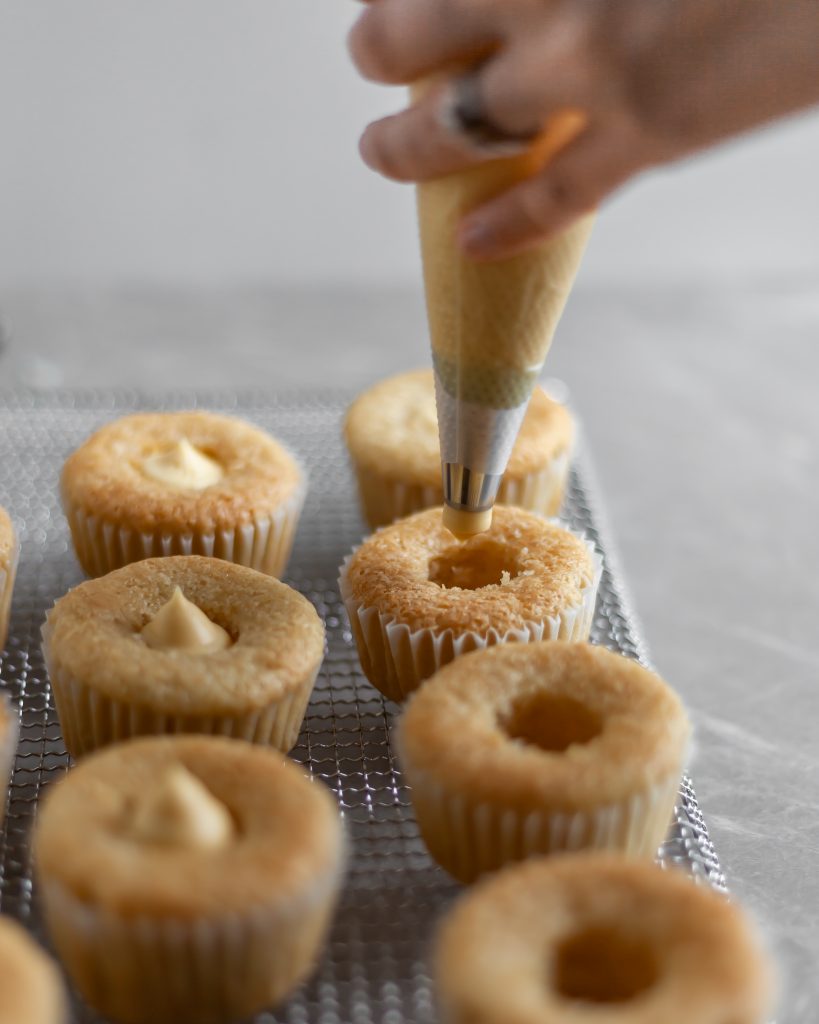 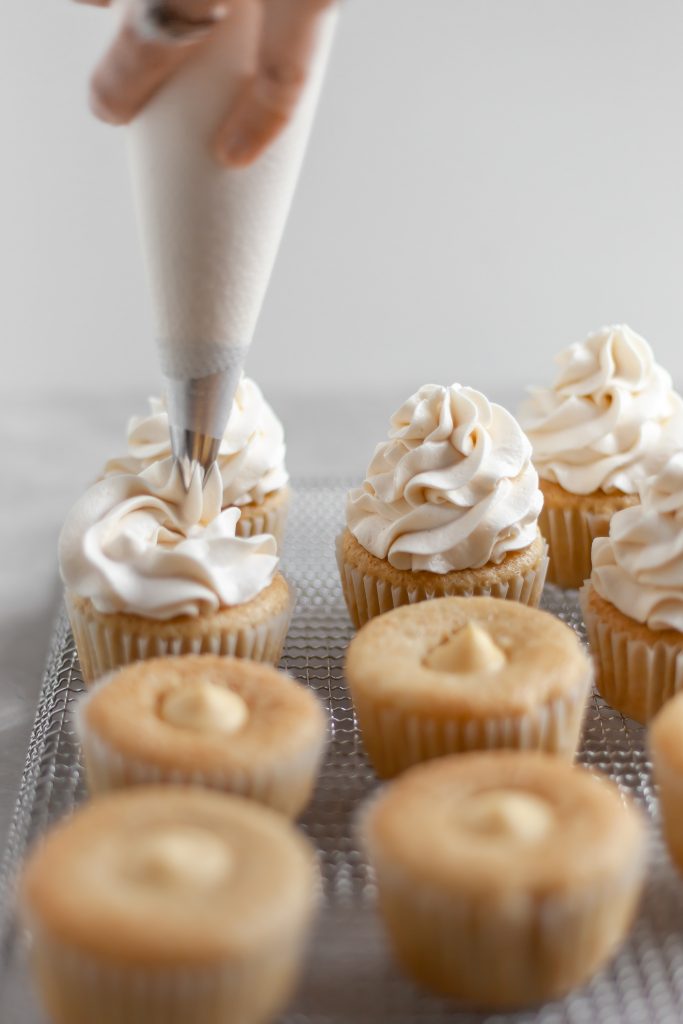 Step #3: Top the Cupcakes with a Cloud of Coconut Frosting. 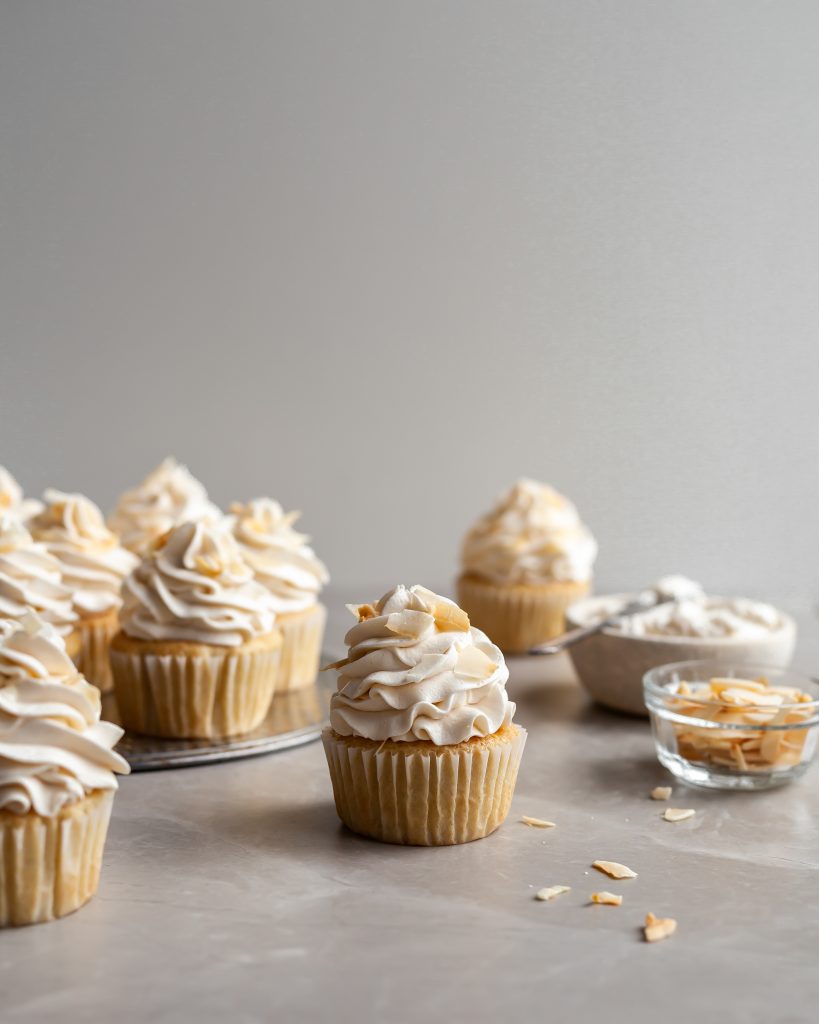 If you make these Vegan Coconut Cream Cupcakes, please let me know in the comments below, and feel free to give it a rating! Also, I love connecting on Instagram where you can tag me in your creations using my recipes. I love seeing what you’re up to in the kitchen! 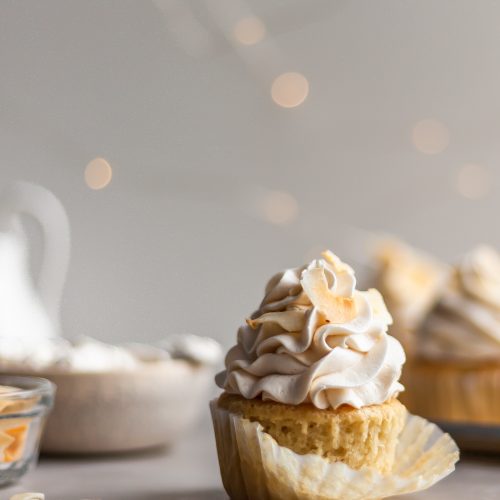 For the Custard Filling:

To Assemble the Cupcakes:

I’d love to try these! What brand coconut milk do you use ? I want to make sure the one I choose closely matches its fat content. I find it varies among brands even if they are all “full fat”. Thanks 😊

Hi Veronica! I've made these coconut cupcakes with different brands of full-fat coconut milk - I usually buy what's on sale. The results have been fairly consistent between the different canned full fat coconut milks. I hope you love these cupcakes! ~ Bronwyn

this looks so awesome! can you make them the day before? would they need to be refrigerated? thanks!

Hi Faith! Yes, you can make the cupcakes the day before - I would keep them in the fridge overnight. As they are custard based in the centre, it's probably best in terms of food safety to do so. The frosting holds up in the fridge better if your kitchen is a bit warm (in the heat, it will slouch.) You could remove the cupcakes from the fridge maybe 30 to 60 minutes before you plan to serve them. I hope you enjoy them! Happy Holidays! ~ Bronwyn

The most delicious coconut cupcakes ever!

Soooo happy you enjoyed these so much, Serena! Thank you for the awesome review! :) ~Bronwyn

Hi Bronwyn, I was wondering is there a way that I could substitute the normal flour to gluten free flour? Or a gluten free alternative? Thank you Ps: so in love with your recipes and the photos just add more life to everything!

Hi Jessica, Thank you for the sweet note! Yes, you can use a gluten-free all-purpose flour blend. Look for one which has xanthan gum and does not have chickpea flour (I find the flavor a bit intrusive.) If the blend does not contain xanthan gum, sift 3/4 tsp xanthan gum in with your dry ingredients and whisk really well so it's evenly distributed. The xanthan gum acts as a binder. I hope you love these cupcakes :) ~Bronwyn

I made these and they were AMAZING! My only question is, what kind of custard powder do you use?

Thank you! I'm so happy to hear you enjoyed them! I use Bird's Custard Powder. It's accidentally vegan. You can find it on Amazon but a lot of stores carry it in the pudding/pie filling section. :) ~Bronwyn