This is my go-to recipe for simple, delicious, no-fail vegan chocolate cupcakes . It’s an adaptation of my Chocolate Cake with Fluffy Espresso Buttercream and my Chocolate Bundt Cake with Salted Peanut Butter Glaze. I’ve been making these recipes for years, from my wedding cake to cakes and cupcakes at a farmer’s market to fundraisers. The treats get compliments whenever they’re served, and most of the time they’re served to non-vegans which is the ultimate test!

Sift! Sifting is a must to avoid bitter lumps of cocoa powder and other dry ingredients in your cupcakes. You might be surprised at how much doesn’t get through the sifter and could have ended up in your cupcakes. Use the back of a spoon to break up the lumps so they sift through.

Don’t reduce the amount of sugar or the oil – these are both very important for the structure and texture of the cupcakes. Reducing them or substituting with other ingredients will effect the quality and moist character of the cupcakes.

Vinegar might not be something you’re used to seeing in a cupcake recipe, but it’s one of the best ingredients in vegan baking! Consider the popularity of sour cream or buttermilk in traditional baking – it’s the acidity from these products that help create a tender, moist crumb. And I promise you can’t taste any vinegar in the cupcakes!

Don’t overfill your cupcake liners! Cupcake bases look the best when they just peak over the paper liner. If the liners are overfilled, the bases will look a bit like wonky mushrooms and stick to the baking tray, or sink in the middle during baking. Fill with batter just until the liners are about 2/3 full.

Chocolate ganache might sound a little fancy but it’s one of the easiest sweet treats to make and takes only two ingredients: a creamy base and chocolate! Simmer the coconut cream, and then whisk in the chocolate until it’s melted. Keep stirring until you’ve created a luscious, smooth ganache. So easy! Once it’s cooled, we whip it with vegan butter and confectioner’s sugar into a fluffy, rich frosting.

Depending on what you’re making, different liquid bases can be used in ganache. For a drip on a cake, for example, something thinner like plant-based milk can work. In this case though, where we want something that whips up fluffy and light, a heavier base is necessary. Enter: full-fat (heavy) coconut cream!

The fat content is important when whipping the ganache. Think of whipped coconut cream – we’re going for something similar but with lots of chocolate! This is an indulgent treat, set let’s get on our stretchy pants and just enjoy a cupcake!

If you can’t find cans of coconut cream, you can use cans of coconut milk and simply remove the cream, saving the coconut water for another use. The easiest way to do this is to refrigerate the can for a day, then carefully scoop out the cream. Be sure to check the label – we don’t want any gums or emulsifiers in there which keeps the fat and water together. The ingredient list should be simple: coconut cream, or coconut cream and water.

What Kind of Chocolate to Use?

As one of the two stars in the ganache, the chocolate should be really good on its own. This is what you will taste the most in the frosting! The flavor of the coconut cream is somewhat masked by the chocolate, and does not stand out. You can use good quality chocolate chips or chopped bars of chocolate. Avoid chocolate with long ingredient lists or that feels a bit waxy when you chew it.

Ratios of cream to chocolate vary depending on how thick you’d like the ganache to be. For this recipe, we want things thick and rich! We use equal amounts (by weight) of the coconut cream and chocolate. Anything less, and we’d end up with a less fluffy frosting.

Whipping the Ganache into Frosting

Depending on how sweet the chocolate is to start with, you may chose to use more or less of the confectioner’s sugar listed in the recipe. Test as you go, it’s a tough job but someone’s gotta do it!

This recipe makes enough frosting to pipe a modest amount on 18 cupcakes. If you want to go all out and pipe tall frosting on the cupcakes, double the recipe for the frosting. You may then have some leftovers. Save the rest for another use (think: adding to steamed plant-based milk for hot chocolate, decorating a cake, or adding into homemade truffles!) The ganache can also be thinned with a bit of hot coconut cream, cooled to room temperature and then drizzled over the frosted cupcakes.

Make Ahead and Storage Tips

The vegan chocolate cupcakes and whipped ganache frosting can be made ahead of time. You can bake the cupcakes the day before, seal tightly at room temperature and then frost them. The bases also hold up well when sealed tightly and frozen for up to a month.

The frosting can be made up to 3 days ahead of time, and stored in a tightly sealed container in the fridge. Set it out on the counter for 30 minutes to soften, then re-whip and frost the cupcake bases.

It’s best to frost the cupcakes within a couple of hours of serving them so they are as moist and fresh as possible.

If your kitchen or home is hot, pop the cupcakes in the fridge once they’re frosted. This frosting is not stable in the heat, and will soften considerably. By the same token, the frosting firms up a lot after being in the fridge for even 20 minutes so let them sit out a few minutes to soften before serving. All that said, cupcake bases tend to dry out in the fridge if stored there more than a day.

Frosted cupcakes can be frozen, too if stored in a tightly sealed container. To defrost, transfer them to the fridge for a few hours and then bring them to room temperature before serving.

If you make these Vegan Chocolate Cupcakes with Fluffy Chocolate Ganache Frosting , please give them a rating in the recipe card and leave a comment below! Follow along on Instagram where you can tag me in your creations using my recipes. I love seeing what you’re cooking! You can also follow me on Pinterest for vegan recipe inspiration. Thank you for reading! 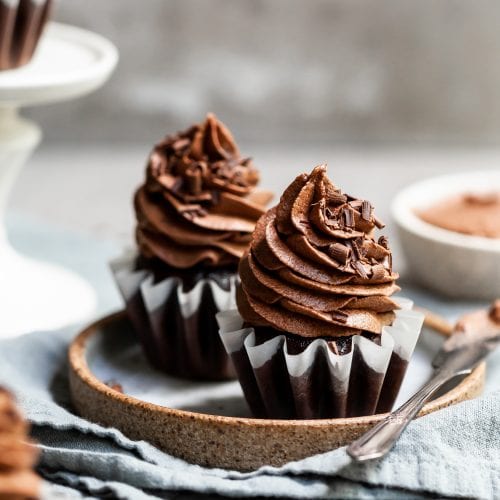 For the Vegan Chocolate Cupcakes:

For the Fluffy Chocolate Ganache Buttercream:

For the Vegan Chocolate Cupcakes:

For the Whipped Chocolate Ganache Buttercream:

*If you can’t find cans of coconut cream, you can use cans of coconut milk and simply remove the cream, saving the coconut water for another use. The easiest way to do this is to refrigerate the can for a day, then carefully scoop out the cream. Be sure to check the label – we don’t want any gums or emulsifiers in there which keeps the fat and water together. The ingredient list should be simple: coconut cream, or coconut cream and water. **Use vegan butter sticks which contain less water than tub-style vegan butters. The frosting can be made with shortening (which is more heat stable) if desired, or even half shortening and half vegan butter sticks, if you’re trying to create a frosting that will hold up in the heat a little better.
Did you make this recipe?Tag @crumbs.and.caramel on Instagram!

Oops...forgot to leave a rating!

Thanks so much! I really appreciate you taking the time to share! :) ~ Bronwyn

These cupcakes look absolutely luscious! I’d love to turn these recipes into a cake instead of cupcakes. Will the frosting hold up to being spread on and in a layer cake?

I ended up using a different cake recipe to be on the safe side, but dove in head first with this frosting. It worked like a dream! I doubled the recipe to frost and decorate a two-layer 10" square cake and had about 1.5 cups left over... which I've happily been dipping strawberries in and spreading on graham crackers. This frosting is decadent and rich and light without being too sweet which I really appreciate. This will definitely be my go-to recipe. Thank you so much, Bronwyn! 😊

Thanks Netty! I haven't tested these as a cake but I suspect it would be fine! I'd chill the cake layers before assembling. I'd love to hear how things work out! ~ Bronwyn

Omg I love this recipe! Do you have some tips how to turn this recipe into a red velvet one? 🙂

Thanks so much! I haven't tried making red velvet but it's definitely on my to-do list. I'll be sure to send out an update to email subscribers once I post it! If you beat me to it, would love to hear how it goes! :) ~ Bronwyn

How do you keep the cupcakes from sticking to the liners?

Hi Kate! Cupcakes can stick to their liners if they haven't cooled completely, or if the amount of oil in the recipe is reduced. You can try buying non-stick liners, or lightly spray your liners with baking spray. Hope this helps and that you enjoy these cupcakes! ~Bronwyn

Love this! Where can I find these cupcake liners? Been searching for one!

Thank you! I love these liners, too! They are made by Wilton and are called "wave" cupcake liners - I picked these ones up on Amazon . I've also seen them in Michael's. ~Bronwyn