These Ultimate Vegan Brownies are sure to leave all members of Team Cakey Brownie and Team Fudgy Brownie happy. We could even drop the word vegan (even though they are) because they might just be THE Ultimate Brownies. Melt-in-your-mouth, smooth, a bit fudgy but not gooey, super chocolatey, nice clean edges when cut, and not so rich that ganache or ice cream on top is, well, over the top. Sounds good doesn’t it? Well, read on for the recipe and go get baking! 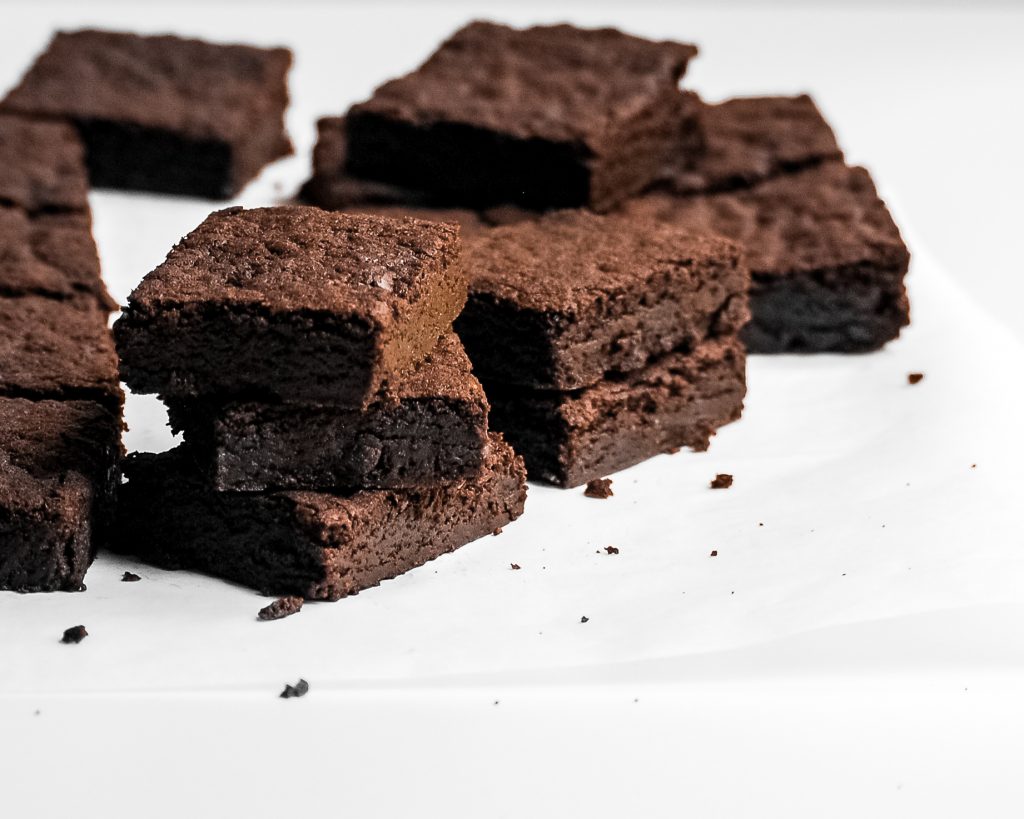 Guys, I’m sure I must have eaten my weight in these brownies while testing different batches so you know these are amazing. My husband was somewhat alarmed when he came home from work on day 3 of recipe testing and asked “…why?” in disbelief that I was working on yet another batch. I had certain characteristics I was looking for, characteristics I had hoped to achieve even before I’d adopted a vegan diet years ago but never achieved from any of the recipes I’d tried. They’d be good but not EXACTLY what I was after. They were either too greasy, too gooey, too dry, too sweet, too bitter and, before I was vegan, too eggy.

While I am in no way a picky eater, the taste of egg in baked goods has always been offensive to me. Not sure why, but needless to say I don’t miss them in baking. Happily, I’ve learned that the physical characteristics eggs offer in baking can be easily substituted with other ingredients. I’m not a big fan of using flax eggs, chia seeds, or various starches as egg substitutes in indulgent desserts as I find they alter the mouth feel and crumb of the non-vegan versions we’re trying to mimic. Playing around with leavening agents can work very well, so a bit of baking powder which is not always in fudgy brownie recipes actually works perfectly here. 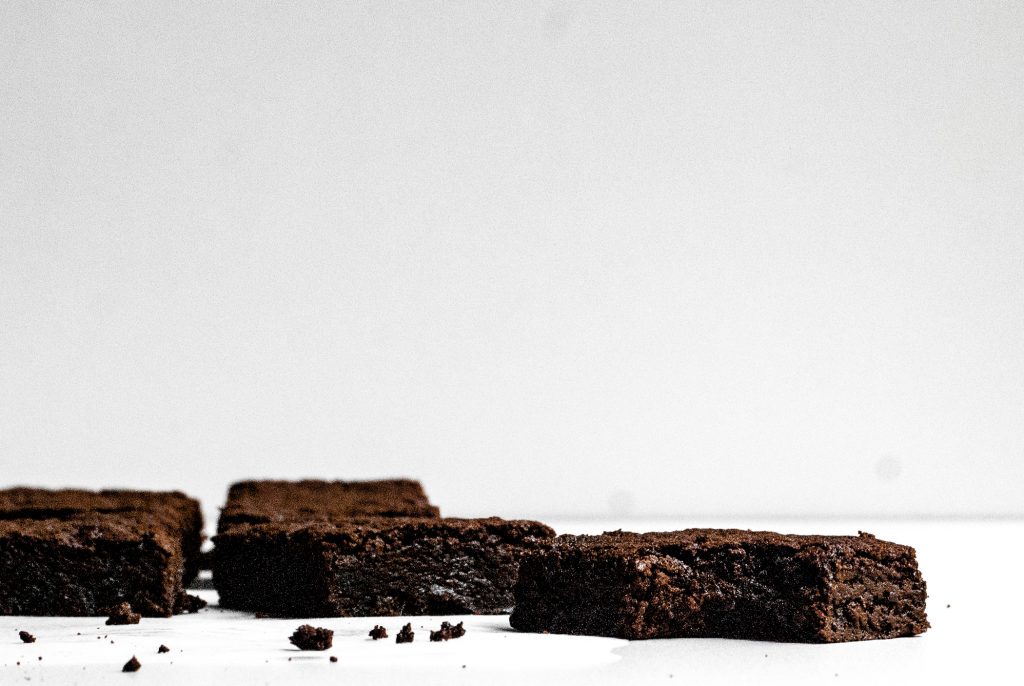 An unexpected deviation I made from my original plan was with the sugar I used in these brownies. I wanted a super smooth brownie and found that granulated sugar interferes with smoothness. It’s not that I didn’t enjoy the brownies made with granulated sugar, but I was looking for something silkier. Enter: confectioner’s sugar. This is the sugar used in frosting and is powdered so when it’s blended with wet ingredients, it dissolves nicely and helps create (ta-dah!) a super smooth brownie.

I had started out by using cocoa powder but I found it resulted in a cakey brownie. The brownies were also a touch more bitter even with more sugar added. So I decided on melted chocolate instead of cocoa powder. In addition to a denser brownie, the melted chocolate also makes the brownies smoother, and gives them a melt in your mouth quality. The star is the cocoa butter in the chocolate which firms up once the brownies cool, but then melts when you’re chewing it. Oh. My. So good! Which, while I’m on the topic of chocolate, be sure to use one you LOVE. The chocolate is the main flavor here so if the chocolate doesn’t taste good, neither will the brownies. 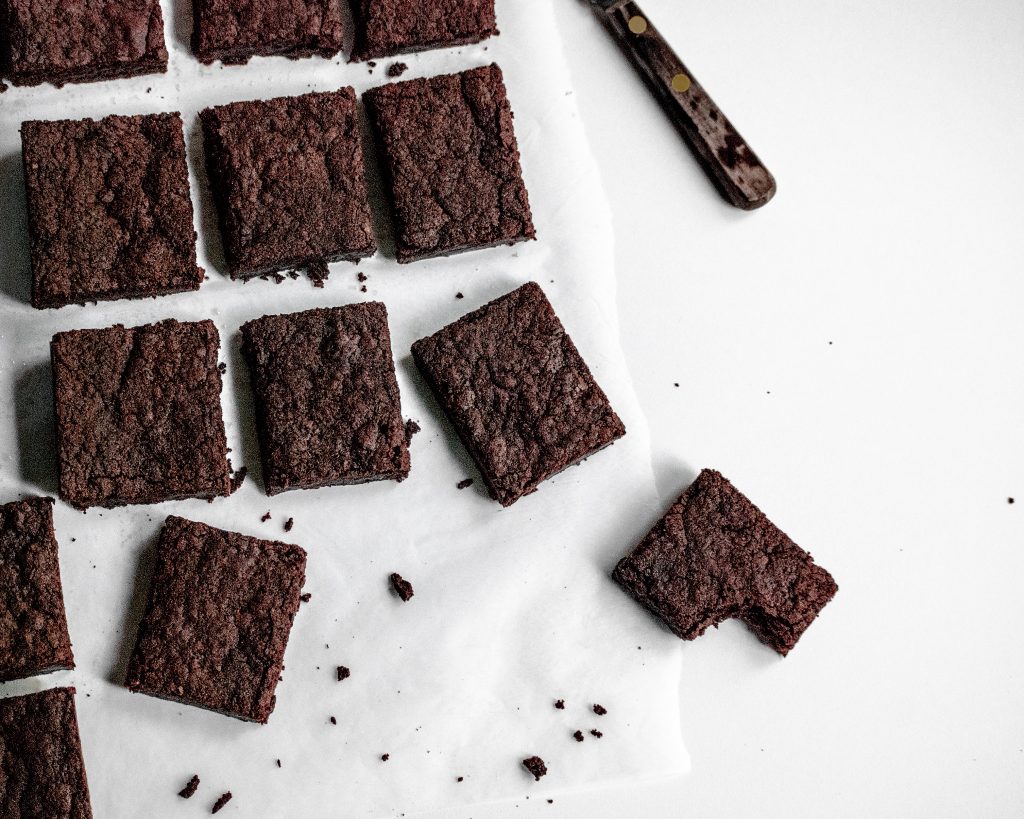 I have not found a vegan butter I enjoy using in baking, granted there are a few I haven’t tried yet. I find that the ones with any flax in them end up tasting fishy once heated, and others contain too much water making getting the recipe right a lot more time-consuming. I’ve tried using coconut oil and while they taste great and have nice texture, when the brownies reach room temperature, I find there’s tiny specks of solidified coconut oil throughout them. So I went with a liquid oil in the interest of a “prettier” brownie. And while there appears to be less oil in these compared to some other brownie recipes, there’s also the fat in the chocolate which really helps set up the structure of the brownies and give them a nice mouth feel. It’s best to cool the brownies completely before serving, otherwise they may be a bit greasy on the bottom. This is just the cocoa butter and will appear to “dry” up once the brownies are at room temperature again. They will also be sturdier, too, at that point. Am I saying don’t eat them warm? Heeeeeck no, they’re amazing warm (especially with cashew-based caramel ice cream and chocolate sauce), but just stating the obvious that melted cocoa butter will be making its presence known on your fingers if you eat a warm-from-the-oven brownie.

I’d love to hear how you like this recipe! If you make brownies, please let me know in the comments below and feel free to give it a rating! Also, I love connecting on Instagram where you can tag me in your creations using my recipes. Thanks for reading along and I hope you enjoy this recipe! 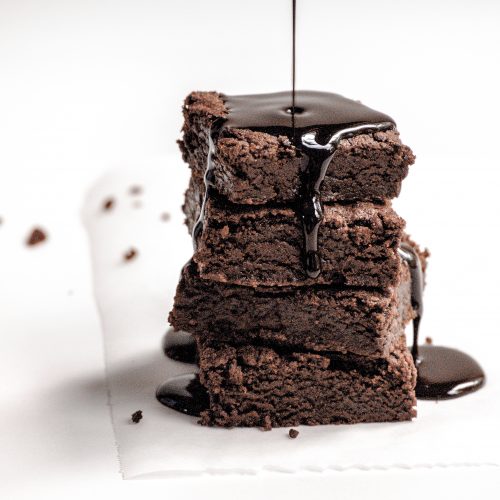 These are the ultimate brownies with the happiness found between team cakey and team gooey. Dense but melt in your mouth, smooth, a bit fudgy but not taffy-like, super chocolatey, have nice clean edges when cut and not so rich that ganache or ice cream on top is well, over the top..sounds good doesn't it?  Well, go get your bake on!
5 from 7 votes
Print Pin
Course: Dessert
Cuisine: American
Keyword: Vegan Brownies
Prep Time: 10 minutes
Cook Time: 15 minutes
Total Time: 25 minutes
Servings: 16 brownies
Calories: 184kcal
Author: Bronwyn

Just made these today, it was sooooo good! definitely making these again 🙂

Hi Angela! I'm so happy you enjoyed the brownies! Thank you for taking the time to leave a review :) ~ Bronwyn

Heyy!! Absolutely loved them soo much. The tricky part is that with every bite they would crumble and did not hold well. What can I do to fix this?? X

Hi Tania! I'm so sorry to hear about the crumbling! They shouldn't do this - they should be dense but not gooey or cakey. I have a few thoughts on what might be contributing to it. Measurements: too much flour (1 cup should weigh about 128 g but if not spooned into a dry measuring cup [no spout] and leveled off will be much more flour; check out this out: https://www.cupcakeproject.com/how-much-does-a-cup-of-flour-weigh/ ), too much sugar, or under-measuring the chocolate will all lead to crumbling. Using granulated (table) sugar instead of confectioner's (powdered) sugar - this is because they are not equal, 1 cup of granulated is almost 2 cups of confectioner's. Chocolate with lower cocoa butter content could contribute to this (there's some "chocolate" out there that has a lot of filler and not as much cocoa butter and is a bit waxy when you eat it instead of melty). Over baking will also cause this - do you have an oven thermometer? My oven lies so I got one - to get 350•F I need to set it for 385. Likewise, if an oven runs hotter, it would need to be set at a lower temp on the control panel to get 350 when baking things like brownies that need a short baking time. I hope this helps! Let me know how you make out! :)