Pan-fried gnocchi are served under a blanket of seared mushrooms in a creamy, garlicky, cashew butter pesto sauce. Make the sauce while the water comes to a boil for the gnocchi to get this flavorful and comforting dinner ready in under 20 minutes!

It wasn’t until recently that I realized just how good cashew butter is. It’s not that I didn’t enjoy it before, I just never bought it. I use cashews in a lot of my recipes to create creaminess and to thicken in a nutritious way, so I’m surprised I hadn’t used actual cashew butter before. Well, game changer! It’s so good! I put it on the kids toast the other morning with a light sprinkle of cinnamon and they said it tasted like chocolate. I’m not sure I agree with that description, but they hammered it down so I’m not arguing with them! 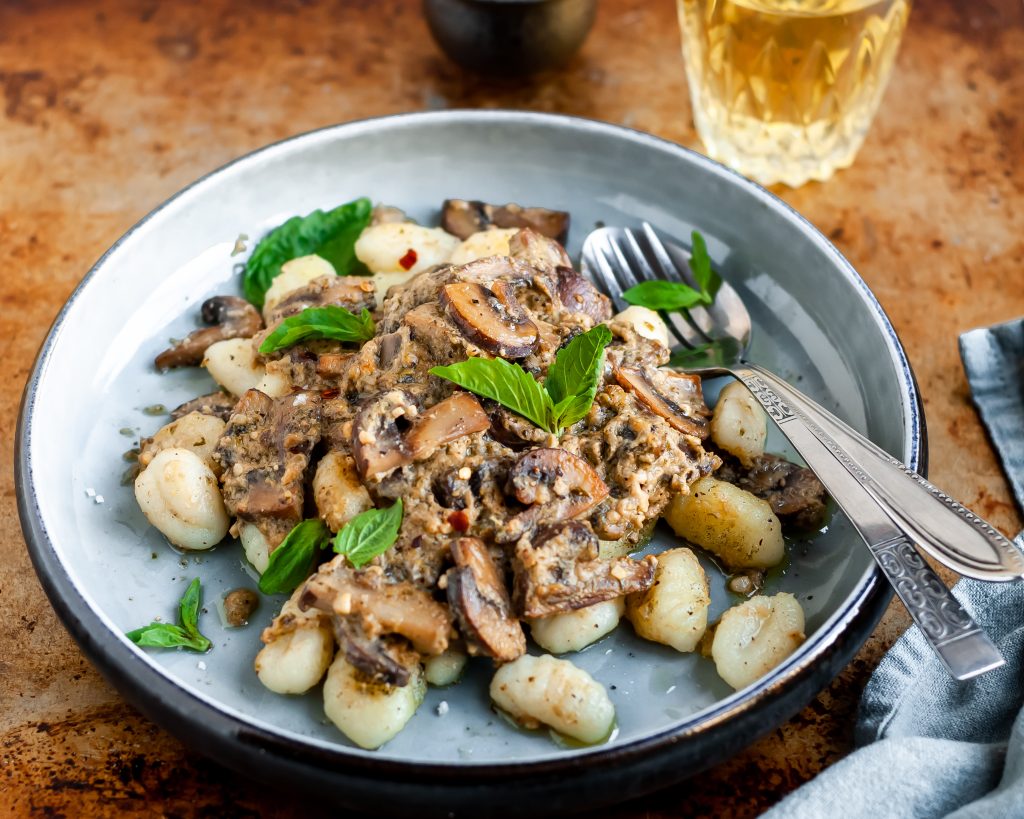 Pan-Fried Gnocchi and Seared Mushrooms in a Cashew Butter Pesto

There’s some differences between using raw cashews blended up with soup stock to make a cream sauce, and using cashew butter which thickens and flavors the sauce. First is the flavor – raw cashews are really mild. Indeed, this is one of their best qualities because they can be used in savory and sweet dishes. Cashew butter has a stronger flavor which is lovely in its own right, and is further enhanced when the cashews are roasted prior to being ground into a butter. Its nutty, umami flavor is perfect for enhancing a savory dish sauce like this one!

If you’re not familiar with umami, it’s one of our five basic flavors (next to saltiness, sweetness, sourness and bitterness). It’s the flavor some people miss most when they give up animal-based products like roasted or fried meat and dairy cheeses which are rich in umami. The good news is we can increase this savory flavor with plant-based ingredients which are also naturally rich in umami. Miso, mushrooms, nuts (the cashew butter), wine, and garlic are the main umami sources in this recipe. You can get umami from lots of other plant-based sources like tomatoes, soy sauce and tamari, tempeh, potatoes, carrots, nutritional yeast, vegan cheese, green tea…the list goes on! Roasting and caramelizing helps bring out the umami, as well.

If you make this mushroom gnocchi recipe, please let me know in the comments below and feel free to give it a rating! Also, I love connecting on Instagram where you can tag me in your creations using my recipes. Thanks for reading along and I hope you enjoy this recipe! 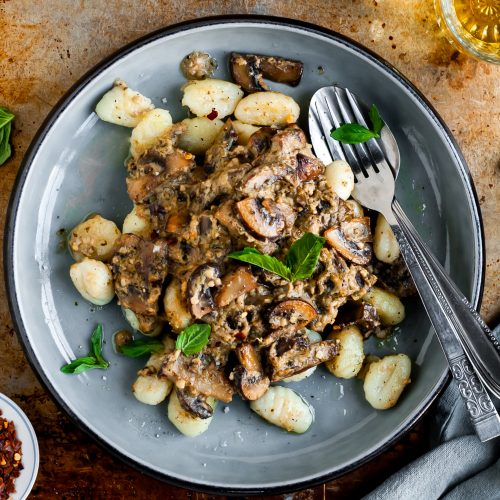 For the Seared Mushroom and Cashew Butter Pesto Sauce:

For the Seared Mushroom and Cashew Butter Pesto Sauce:

*Want dinner on the table even faster? Skip pan-frying the gnocchi, and just boil them according to package or recipe directions.
Did you make this recipe?Tag @crumbs.and.caramel on Instagram!