These smashed potatoes are tender on the inside but crispy on the outside. Simple enough to make: boil, smash, and bake! But be warned: they are highly addictive!

Perfect finger food or appetizer, these crispy tots are great for brunch or beside your favorite veggie burger. A naturally vegan and gluten free snack, they’re everything you need in an easy potato recipe. I’d go so far as to say they are better than French fries, hash browns or potatoes wedges!

How to Make Crispy Smashed Potatoes

Use small potatoes – baby potatoes are best! They have those tender, buttery insides and their thin skin gets so perfectly crispy without becoming chewy like that of say, an older Russet. I really like a combination of yellow and red baby potatoes. Waxy potatoes are creamier inside, whereas drier potatoes like Russets will be fluffier inside.

Boil the potatoes in salt. A lot of salt. This is a trick I first learned when I was researching the best methods for making potato salad. I came across an article by Bon Appetit which says using a cup of kosher salt for a pot of potatoes creates the most perfectly seasoned potatoes. Now before I lose you, the potatoes don’t absorb all of this salt. However, by boiling them in super salty water, they become seasoned all the way through. So, I tried it…and was sold on it! Since then I’ve experimented with different amounts of salt considering so much of it goes down the drain. The potatoes still turn out perfectly seasoned with about 1/4 of the salt the article recommended and so that’s what I go with now.

Don’t over cook the potatoes. That is, don’t boil the potatoes until they are super soft. Barely fork tender is perfect. They still have about 40 minutes to go in the oven once they’re boiled. If they are over-boiled, they can “over-squish” (new term?) and be super flat. This isn’t necessarily a bad thing because they still become super crispy, but there won’t be as much of the tender insides.

Add the oil to the potatoes only once they’re completely dry. If they’re wet, the oil won’t be able to coat them as well and they won’t be as crispy. Dry them by placing them on a baking sheet and baking them for a few minutes before coating in oil and smashing.

Bake directly on the baking tray instead of on parchment. Yes, this is messier to wash up afterwards but it’s so worth it. The potatoes become extra crispy this way!

These crispy smashed potatoes are begging to be dipped even though they’re delicious on their own. Some ideas: vegan sour cream, good ol’ ketchup, pesto, marinara sauce, vegan cheese sauce, guacamole…the list is endless.

If you make these Crispy Smashed Potatoes, please give it a rating in the recipe card and leave a comment below! Follow along on Instagram where you can tag me in your creations using my recipes.! You can also follow me on Pinterest for vegan recipe inspiration and on Facebook. Thank you for reading! 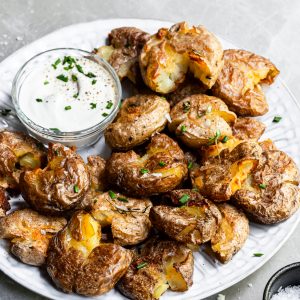 Post may contain affiliate links which means if you click on the link and make a purchase, I may make a very small percentage in commission on qualifying purchases.  There’s never any extra cost to you, and I only link to products I actually use and enjoy.  Thank you for your support!