Often times, coconut cream is the main ingredient in vegan ice creams, but I really wanted the fresh flavors of the strawberry and rhubarb to shine without any competition from coconut. This vegan ice cream gets its richness from cashews! Even though there’s one can of sweetened condensed coconut used in this recipe, it’s such a small volume that the coconut flavor isn’t detectable.

To Churn or Not to Churn?

If you have an ice cream maker, then I’d say dig it out when making ice cream, even for the “no churn” recipes. Ice cream makers do the important job of incorporating air and agitating the ice cream so the ice crystals that form during freezing are tiny. Small air pockets and tiny ice crystals means that the ice cream will be smoother, creamier and easier to scoop! If you think about what happens when you freeze water, you get a solid hard mass of ice. Add some fat (creaminess), sugar (flavor and reduces freezing point a bit), guar gum (see the next section) and agitation, you get a very different product: a creamy, smooth, easily scooped frozen treat!

Now if you don’t have an ice cream maker, don’t worry. Your ice cream isn’t doomed! For some ice cream recipes, we can agitate the ice cream as it freezes by hand. That is, we’d use a whisk or a blender to beat the ice cream every 30 minutes or so as it freezes. But with a recipe like this one where we have a defined swirl and/or inclusions like the crumble, we can’t do that. So we make the best of it!

We beat the ice cream long and hard in the blender before freezing which gets some air into the mix, and helps emulsify the fat. We then either 1) serve the ice cream *just* as it becomes scoopable, or 2) let the ice cream sit out for 20-30 minutes at room temperature (or an hour in the fridge) before serving so it can soften a bit.

I’ll start off by letting you know that using guar gum in this recipe is totally optional!

Now, you may have noticed that it’s rare to find ice cream (vegan or not) in stores without stabilizers like guar gum. As much as “stabilizer” or “food additive” may sound unnatural and menacing, guar gum is just a powder made from guar beans.

It makes a big difference in ice cream, emulsifying the ice cream base so that that fat doesn’t separate from the higher water content ingredients (like the plant-based milk and the water in the soaked cashews). When they separate (particularly if they haven’t been well blended from the start and then are frozen, partially thawed, and then refrozen which can happen during the distribution process), you get ice crystals and the ice cream can become hard and grainy.

So while it’s not essential to use the guar gum when making homemade ice cream, it does make for a better ice cream texture. This is especially true if you won’t be eating the ice cream straight away. Each time you take the ice cream out of the freezer and let it sit to soften before serving, the quality is being reduced. By adding guar gum, you’ll find it easier to scoop the ice cream, too. 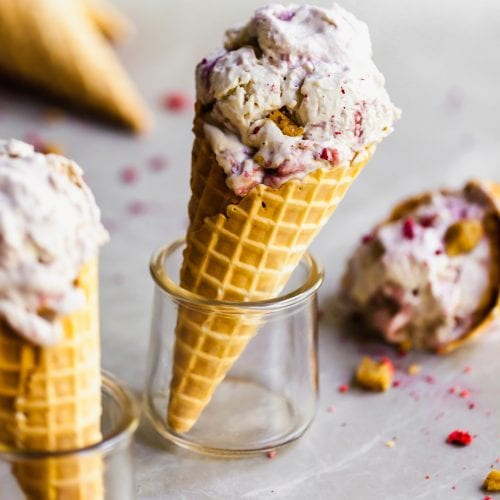 For the Strawberry Rhubarb Sauce:

For the Ice Cream Base:

For the Strawberry Rhubarb Sauce:

For the Ice Cream Base: