Sweet, juicy peaches nestle into a layer of silky almond cream and are baked in a melt-in-your-mouth shortbread crust. This delicious tart is so easy to make and doesn’t require any pastry rolling!

There’s something about the flavor of almonds that really makes peaches even more delicious. I first experienced this with a peach pie I made years ago; the recipe called for a bit of almond extract tossed with the peach filling. Once the tart was baked and cool enough to eat, I had a slice and, oh my goodness! It was then that I knew that I needed more peach and almond in my life.

I’d been thinking about this flavor combo again since I first made a vegan Bakewell tart last spring. If you haven’t had a Bakewell tart before, it’s a tart filled with raspberry preserves and frangipane (with different variations out there.) The frangipane layer is like a thick almond custard. Traditionally, eggs are used in a custard or frangipane base but here I made it vegan with the use of some accidentally vegan custard powder. In a pinch you could use cornstarch but the flavor that the custard powder is so good and makes the filling indistinguishable from non-vegan versions.

This is the kind of dessert you can whip up a few hours before company arrives and not totally destroy a tidy kitchen in the process. The shortbread crust is made in one bowl and par-bakes while you whip up the almond cream filling. The filling doesn’t get any simpler to make – you blend the ingredients and pour them into your prepared tart crust. From there, you place some sliced fresh peaches on top; I don’t even peel mine as the skin is pretty, but you could peel them if you prefer! Once it’s baked, let it cool completely to room temperature before serving. Easy, right?

Any tart leftovers can be kept in the fridge but be sure to have the tart come to room temperature before serving as the crust will harden when cold. 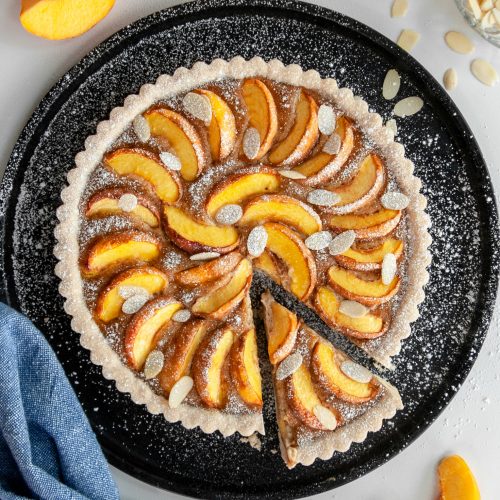 Wow Bronwyn this tart looks incredible! Love the presentation, and your photos are stunning!!

Thank you so much!💕