A classic cinnamon roll is always in vogue. It’s delicious, comforting, satisfying. All of the things. But I find a hard time applying the “if it ain’t broke, don’t fix it” way of thinking sometimes. This is especially true when I really can’t think of a reason why peaches wouldn’t dress up a cinnamon roll…or why a crunchy crown of almonds, rolled oats and brown sugar wouldn’t be amazing on top….or why an almond glaze wouldn’t just enhance the beautiful summer peach flavor…

So I did it. I added the peaches, the streusel, and the almond glaze. And you know what? The rolls were amazing. We cleaned them out in record time. The one change I made from my test batch was…more peaches! My goal was to not to have hints of peaches, but at least a piece of peach in each bite but not so much that the rolls would be soggy from peach juice (read: overdoing a good thing.)

Indeed there are recipes out there for one hour cinnamon rolls, (I love them and will be sharing a recipe for one soon) but to get a lush, tender, elastic crumb, there’s no substitute for rolling your sleeves up, kneading the dough (or letting your stand-mixer do it for you) and letting the dough rise long enough. The payoff is so well worth the little extra effort and time. And if you’re like me, you may even find yourself enjoying kneading the dough by hand. There’s something almost therapeutic about it, the repetitive motion slowly creating a silky smooth dough with no stickiness remaining.

I use refined coconut oil in the dough and the streusel. If you use unrefined, you’ll have coconut flavor in the rolls which isn’t necessarily a bad thing but it isn’t part of the flavor profile I was aiming for here.

In this recipe, the dry active yeast is added directly to the flour. Key word here: active. If your yeast is nearing its best before date, you might want to proof it to make sure it’s still alive and going to rise your dough. To proof it, you simply add the yeast to the warm (not hot or, if your yeast was alive, you’ll now be killing it) non-dairy milk plus a tablespoon of sugar before adding it to the flour. Let it sit for about 10 minutes and if, at the end of that time, there’s no foaming this means your yeast is dead and you’ll have to get new yeast before continuing with the recipe. Dry active yeast that is within its best before date and is stored according to the package directions shouldn’t have any issues and can be added directly to the flour as called for in this recipe.

There’s something about peach and almond together – they marry beautifully. The peach becomes peachier and the almond adds a subtle dimension of flavor. For these cinnamon rolls, almond extract is added to the peaches and to the glaze but just in small amounts as a little almond extract goes a long way. Adding too much makes for a perfume-y product and would overpower the peaches and cinnamon. Almond slices are added to the streusel for some nutty flavor and crispness. The rolled oats also contribute crispness to the streusel – be sure to use the old-fashioned rolled oats, not the quick oats variety. Quick oats are thinner, smaller, and don’t crisp up as nicely as the old-fashioned kind. The quick oats might get a bit lost and don’t offer the same texture we’re looking to have in the topping.

I hope you enjoy these dressed up cinnamon rolls as much as we did. It’s safe to say, these are a new favorite in our home! If you make this recipe, please give it a rating in the recipe card or let me know in the comments! I love connecting on Instagram where you can tag me in your creations using my recipes. You can also follow me on Pinterest and Facebook. Thank you for reading along! 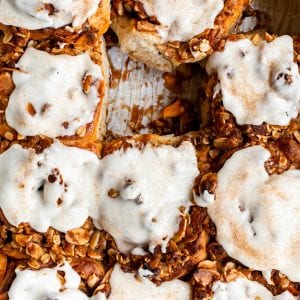 For the Almond Oat Crisp:

To Prepare the Dough, Filling and Streusel:

*If your yeast is approaching the best before date or has not been stored according to package directions, you should proof the yeast rather than add it directly to the dry ingredients. See the recipe blog post for instructions.
Did you make this recipe?Tag @crumbs.and.caramel on Instagram!

Wow nicely done Bronwyn! So many awesome things going into those cinnamon rolls. And I love the look and sound of that almond glaze.

Thanks! The name is definitely a mouthful! Haha! Loving the peaches this year!