The weekend is here and I think we all need to treat ourselves to something delicious and comforting. Enter: these lush apple pie cinnamon rolls. An easy homemade apple cinnamon pie filling is rolled up in a tender, fluffy dough, baked and then slathered with a luscious vanilla glaze. And yes, they’re vegan, but no one would ever guess. Promise.

If you’re like me, the cinnamon roll obsession is not going away anytime soon. There’s just a certain kind of enjoyment I get when I have one which I don’t get from other baked goods. Cinnamon rolls are homey, comforting, and totally indulgent but don’t raise eyebrows at the breakfast table like say, a layer cake would. They’re like an acceptable breakfast dessert for some reason. And I’m not about to question a good thing…

When I was testing apple cinnamon rolls, I tried using diced fresh apples and while they were good, they just didn’t have the caramelized flavor I was after which you get in an apple pie. Cooking the apples gently was the ticket to a perfect filling.

If you make these Apple Pie Cinnamon Rolls, please let me know in the comments below. Feel free to give it a rating! Also, I love connecting on Instagram where you can tag me in your creations using my recipes. I love seeing what you’re up to in the kitchen! Thanks for reading along and I hope you enjoy this recipe! 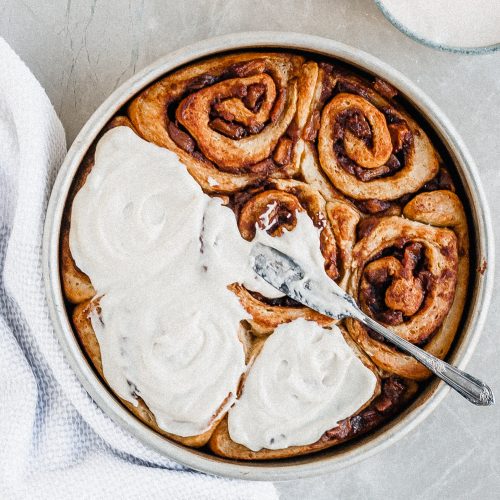 For the Apple Filling:

For the Vanilla Glaze:

To Prepare the Apple Filling:

To Prepare the Dough:

For the Vanilla Glaze:

*If your yeast is approaching the best before date or has not been stored according to package directions, you should proof the yeast rather than add it directly to the dry ingredients. See the recipe blog post for instructions. **Using refined coconut oil ensures you don’t get a coconut flavor. This recipe works well using a neutral liquid vegetable oil instead (e.g. avocado or canola).
Did you make this recipe?Tag @crumbs.and.caramel on Instagram!

I tried out this recipe yesterday and it was a major success and a massive hit with the family! The recipe is so easy to follow and I already can’t wait to make them again! Xx

Hi Marla! Thanks so much for the lovely feedback :) I'm so happy that you and your family enjoyed the rolls! ~Bronwyn