These waffles are pillowy soft inside, crisp on the outside and are lightly coated in cinnamon sugar. Served with chocolate sauce and whipped coconut cream, these waffles make for a special breakfast or, with coconut ice cream, a dreamy dessert!

When I was a kid, one of my favorite snacks my mom would make us occasionally was cinnamon sugar toast. It’s really that simple, buttered toast with a mixture of cinnamon and sugar sprinkled on top. These waffles remind me a lot of that childhood treat. So why aren’t these waffles called Cinnamon Sugar Toast waffles, you might ask? Well, I figured it might be confusing and it’s a bit of a mouthful plus Churro waffles are well-known, so I aptly named these vegan ones as such. What childhood snacks do you remember fondly?

The recipe for the waffles is versatile and makes for a delicious and simple waffle. The cornstarch is the secret star here, contributing to the light crisp exterior and a soft interior. The key is to add just the 1 tablespoon because if you add anymore than that, the waffles get a bit tough. The one tablespoon makes for perfection.

I drizzled chocolate syrup on these and it was pretty amazing, especially with the whipped coconut cream. Other toppings that would be yummy would be maple syrup, fresh fruit, berry sauce or perhaps melted chocolate hazelnut spread! So many possibilities…

No matter how you top yours, I hope you enjoy these Churro Waffles. Thanks for reading! 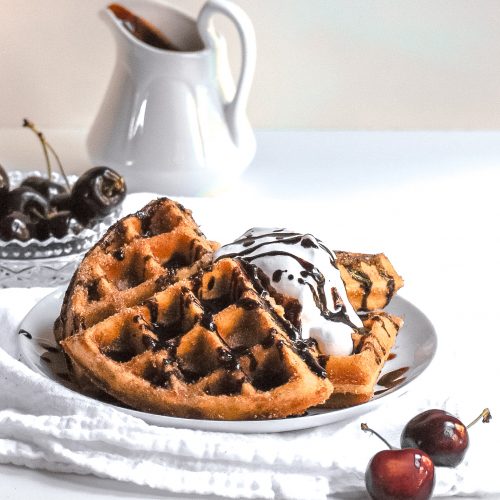 These waffles are pillowy soft inside, crisp on the outside and are lightly coated in cinnamon sugar. Serve with chocolate sauce and coconut whip to make them that much more special.
4.78 from 18 votes
Print Pin
Total Time: 25 minutes
Servings: 6 7-inch waffles
Calories: 487kcal
Author: Bronwyn

For the Cinnamon Sugar Coating: