If you’re looking for vegan comfort food, look no further! These vegan Swedish meatballs are meaty and flavorful. The dairy-free gravy is creamy and rich. Serve over a bed of whipped mashed potatoes or noodles for a plant-based meal that is loved by kids and grown-ups alike.

What are Swedish Meatballs and Gravy?

After doing some reading, it turns out that Swedish meatballs aren’t all that, well…Swedish. In any case, I’m going for what we’re familiar with when we think of Swedish meatballs and gravy. If you haven’t tried this type of comfort dish, the meatballs differ from Italian ones in a couple of ways:

1) The seasonings are different – Swedish meatballs have a warm spice flavor to them, usually from allspice.

2) Swedish meatballs are often smaller than Italian ones (more surface area for that creamy gravy!)

Swedish gravy is often made by adding beef broth and sour cream to a roux (flour and butter paste). For this vegan recipe, I used a vegan beef stock and instead of using flour and sour cream, I opted for cashews. Cashews impart a lovely buttery flavor once blended and make the sauce so velvety and rich. Vegan Worcestershire sauce provides the allspice and deep umami flavors. 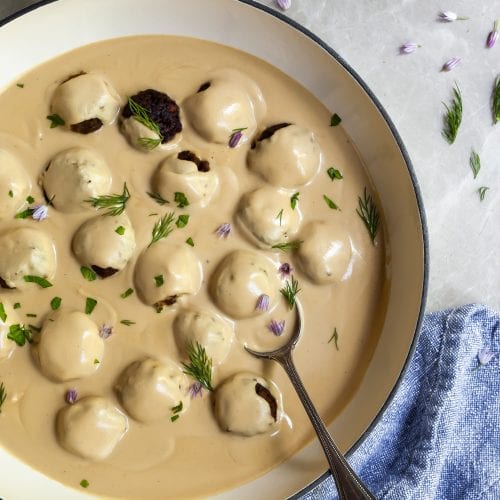 *If you don’t have a high-powered blender, either simmer the cashews in water for 10 minutes, or soak them in water for 8 hours. Drain and use. **I prefer vegan ground (eg. Gardein or Yves), but you can also use TVP (textured soy protein.) Re-hydrate the TVP in vegan beef flavored soup stock . Ensure all stock is absorbed, or drained before using in the recipe. *** Do not store leftover meatballs and gravy in the same container. The meatballs will absorb the moisture and fall apart.
Did you make this recipe?Tag @crumbs.and.caramel on Instagram!

What do you mean by “gluten”? Is it vital wheat gluten?

Thank you,Bronson, for the effort you put into creating these recipes and sharing them. Your photos are beautiful and make me HUNGRY!

Thank you for the kind words, Yvonne! I'm so glad you're enjoying the blog :)