This is one of those times where the homemade vegan version of a nostalgic childhood favorite treat is actually better than the original. Lofty words, I know, but it’s true. These homemade ‘Fudgsicles’ are creamy, fudgy, chocolaty, silky smooth, and so easy to make!

When I was a kid and was offered a treat from the single serve freezer at the local corner store, the Fudgsicle was always my preferred frozen treat, hands down. Sure, the Rocket was pretty epic because it was huge and turned your tongue some intense shades of red and blue, and the giant Freezies were amazing (again, treat size as a kid are pretty influential), but I almost always chose the Fudgsicle.

Since adopting a vegan diet, I have missed them a bit. I have only seen one vegan chocolate fudge ice pop in stores which I tried and while it was really good, it needed more chocolate flavor and fudgy texture to be similar to the original Fudgsicle. And so started my mission of making my own vegan ‘Fudgsicles’ especially after I bought a popsicle mold this summer! It’s been pretty fun putting together different flavors of ice pops for our family – the kids get involved in helping making them, and it’s nice to be able to make different flavors, plus it’s been way cheaper making our own!

These ice pops are really simple to make. Basically, we’re making a thin pudding and then freezing it in molds. This method provides a really, nice silky smooth texture.

A few words about the ingredients I used:

After you’ve made the pudding, it will be boiling hot. Let the pudding cool for a bit in the pot until it’s no longer scalding. A thin layer of skin may have formed – use a spoon to gently peel it off.  If you leave it on the pudding mixture, it will create unpleasant lumps in your ice pops and will make pouring the mixture into the molds really messy. All that said, don’t let the pudding mixture cool too long – it’ll thicken up a bit and, again, make pouring difficult. And truly, the hardest part of this recipe is waiting for these guys to freeze which really isn’t that long! 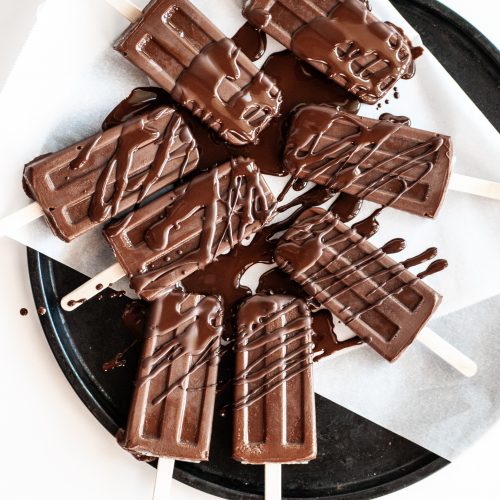 This is one of those times where the homemade vegan version of a nostalgic childhood favorite treat is actually better than the original. Lofty words, I know, but it's true. These homemade 'Fudgsicles' are creamy, fudgy, chocolaty, silky smooth, and so easy to make!
5 from 6 votes
Print Pin
Prep Time: 5 minutes
Cook Time: 8 minutes
Freezing: 4 hours
Total Time: 4 hours 13 minutes
Servings: 10 standard ice pops
Author: Bronwyn

*Soy milk is our preferred dairy-free milk, however the almond milk provided a better flavor during the testing of this recipe. If you need a nut-free milk, rice milk might be a good option!
Did you make this recipe?Tag @crumbs.and.caramel on Instagram!